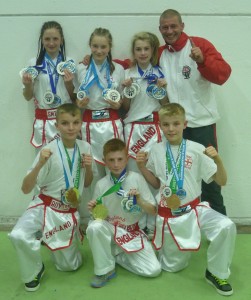 Star of the K.9 members of the England Team was Nicky McHugh (age 12) who had a total of ten fights beating opponents from Russia, France, Scotland, Wales, Ireland, and the Chech Republic on the way to winning Gold in both the Low Kicks Kickboxing category -36 kilos 11-12 years old and the Light Continuous Category -36 kilos 11-12 year olds beating Russia's Bodvn Budvnov in the Light Continuous Semi Final and France's Marcel Desaiaut in the Final, and the welsh Multi Medalled Superstar Ethan Broderick in the final of the Low kicks Category.

Nicky also fought his way through to the final of the Kickboxing age 10-12 years -40 kilos category where he eventually lost in the final to the Ukraines Mark Kutz. McHugh ending the event with two World Gold and one World Silver medal being awarded K,9's "Fighter of the Tournament" getting huge accolades from all the England and International coaches. 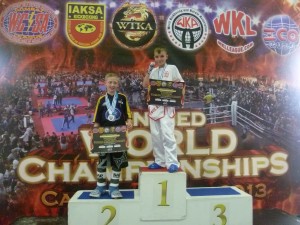 Nicky McHugh with his Gold Medal in the Low Kicks Category

Tia Sayer (age 13) ended up with 3 Gold Medals, she took Gold in the Girls Low-Kicks and K.1 Light -50 kilos categories beating France's Anais Devaud in both finals, Tia scraped through but needs to listen to her coach and work on her technique.

Tia (13) was then drawn against tough French Thai Fighter Lethane Andanaje in the full contact K.1 Final 13-15 year olds -48 kilos, this was a tough rough battle that could have gone either way, with Tia showing massive heart, aggression, and fitness, coming strong in the 3rd round of her 3rd fight of the day and earning a well deserved gold medal by one point.

Chiara Spink (14) beat Portugal's National Champion Maria Beijnha in the Low Kicks Girls -46k 13-15 year olds category semi final but lost out to European champion England's Josie Callan in the final, Chiara settling for Silver. Chiara then ended up in the final of the Light Continuous -46 kilos 13-15 year olds against tough French champion Charlotte Nourressant. Chiara started slow but gradually turned it round and totally dominated the last round taking the victory and a well deserved Gold Medal. 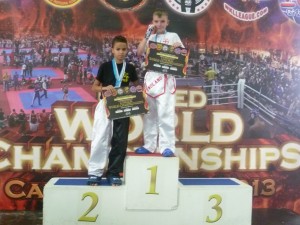 Nicky McHugh with his Gold Medal in the Light Continuous category

Remy Sayer (12) at only 28 kilos was one of the lightest fighters in the tournament, Remy took Gold in the -30 kilos 10-12 year olds Kickboxing category beating Scotland's Harrison baker in the semi final and then a great, close fight with French Champion Tony Jiminez in the final to take the Gold. with no one Light enough at the tournament for him to challenge for the K.1 and Muay thai Categories, he moved up a weight category in the K.1 and met Russia's Vadislav Egoshin in the final losing on points and getting the Silver. In the Muay Thai he had to move up two weight divisions to the -36 kilos and met Russia's Budvn Budnov in the final it was a classic Thai Bout that had the large crowd cheering throughout, it went first one way then the other but the extra weight and strength giving the Russian the edge in the clinch work just edging Remy out, Remy having to settle for another Silver medal.

The least experienced member of the team Conner McHugh (10) achieved a silver medal in the Low kicks 8-10 year olds -40 kilo category, losing out to a Chech Republic fighter in the final. He also got a Bronze medal in the Kickboxing -40 kilo 12 and under's category losing out to eventual winner Mark Kutz of the Ukraine in the Semi Final.

K.9 coach Dave Munro who travelled with and coaches all six fighters was very proud of all their achievements and performances and has now trained 11 World Junior Amateur Champions, 1 Pro Adult World Champion and 3 Adult Pro European Champions in the last twenty years a massive achievement for a gym from a small town like Great Yarmouth and neighboring Lowestoft. K.9 Kickboxing and Muay Thai fight team are based at Legends Fitness Academy in Cobholm by the Haven Bridge where there is Martial Arts and Boxing Training 7 days a week.