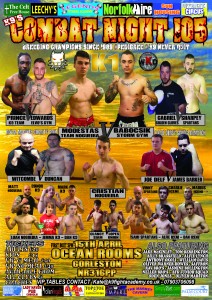 K9 Fight Team and Legends Fitness Academy are pleased to announce our next event COMBAT 105 which will take place on SUNDAY 15th APRIL. This will be our 105th event in over 30 years of Promoting safe, exciting, fully sanctioned, fairly matched family friendly shows.

Once again the Royal Marines Charity will be the benefactor when Danny ‘Royal’ Witcombe takes on Former Para Heathcliffe Duncan in a clash which guarantees fireworks!!

Big Joe Delf and James Barker do it again! (Will James change it around this time?) Spartan’s Sami James and Vinny Shillitto will be back to thrill the crowd again.

We’d like to welcome new gyms to our event Union Muay Thai from Gorleston , Spencer’s Team from Boston and Team Siam from Norwich. Combat Night regulars Iceni warriors from Norwich will have four fighters on, and Norwich Golden Gloves,Rob Judd’s BFK, Elvos Gym, Billy Browns KBA, Bedford Eagles, Apollo, Rav Boys Gym, and many more will be in attendance.

Looks like another exciting packed out evening of ringsports. Tickets and VIP tables will be available from coaches and fighters.