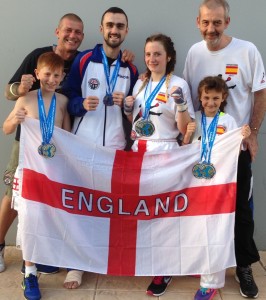 Four fighters and two coaches from the Yarmouth k9 gym travelled to Benidorm, Spain for the unified Amateur World Kickboxing championships as part of the England kickboxing team that had been selected over the year at the national and British open events.

Dan Mitchell (22) Tia Sayer (15) Remy Sayer (14) and Keira Sayer (9) were in several kickboxing and k.1 catagories, with over 4000 competitors from 65 countries taking part this was a massive event.

Remy Sayer battled his way to the finals of the -42 kilos junior low kicks kickboxing category by beating French fighter Alain Briquet in the quarter final, then beating Mazco Dosinchi of Romania in the semi finals. He then fought Shane Lawless of Ireland for the gold medal. Putting on a great display and taking the coveted gold medal. Remy was also in the k1 (ring) category final and the k1 Light categories where he gave a good account of himself, despite being the smallest and lightest fighter in his category. Remy lost in the finals to French fighters but came away with two silver medals to add to his amazing gold. 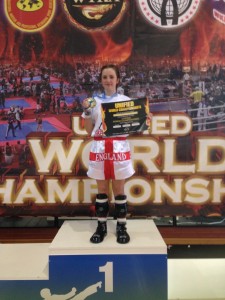 Tia Sayer was in excellent form and beat Lucia Garcia of Spain in the semi finals of the low kick kickboxing -60k girls cadets category, then emphatically beat Romanian girl Emese Nagi in the  final to secure the Gold medal , a great display by Tia.

Tia was also in the final of the k1 light category against Holland's Aleysha Smol , the Dutch are a massive force in k1 and muay thai on the world stage and on paper Tia was really up against it but fighting to coach Dave Munro’s instructions word for word Tia fought her way to a great points win to secure her second gold medal of the tournament, great achievement for the Yarmouth High student. 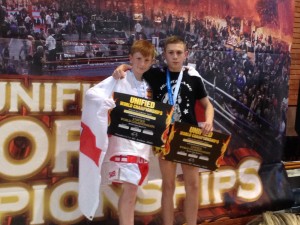 In the first semi final Mitchell was up against the Ukraine’s Vladim Olenchuk who had beaten the USA’s top fighter in his quarter final , Mitchell won this low kicks -67k semi final with an awesome display of boxing and leg kicks. He hurt his foot half way through the fight but still got a unanimous decision. 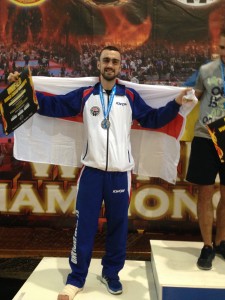 Injured Dan has to settle for 2 silvers

Only 20 minutes later Mitchell was back in the ring against a Ukrainian for his other semi final, the k1 mens -67k, Mitchell was limping from virtually after the first kick but bravely fought on and listening to coaches Dave Munro and John Hutchen's advice used his left leg to great effect winding the Ukrainian at one point. Mitchell despite being in agony outscored his opponent with better knee strikes better clinching and skillful boxing winning a unanimous points victory.

After the fight a trip to hospital confirmed that Mitchell had fractured his foot in two places and was not allowed or even capable of taking part in his two finals the next day. So Mitchell the favourite for the two gold medals had to settle for two silvers but proved he is world class with his victories one of which he fought entirely with a double foot fracture. 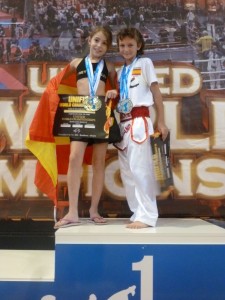 K.9’s and England’s youngest kickboxer on the team was Keira Sayer who made it a great family treble of world gold medalists with a very close and hard fought win over Paula Silva of Spain in the final of the -27k girls Light Continuous kickboxing category . Keira also won the silver medal in the Ring kickboxing category, having a really hard bout with Charlie Coatsworth where she gave away age and a lot of weight as neither girl had anyone in their weight category.

A great week of international experience for the K9 England Team members who came back from Spain with an amazing 4 world gold medals and 5 silvers. K9 club coaches Dave Munro and John Hutchins would like to congratulate their fighters and thank everyone who helped fund raise, transport, and coach the team. A big thankyou from Dan Mitchell to his generous sponsor Colin of Sun Housing.