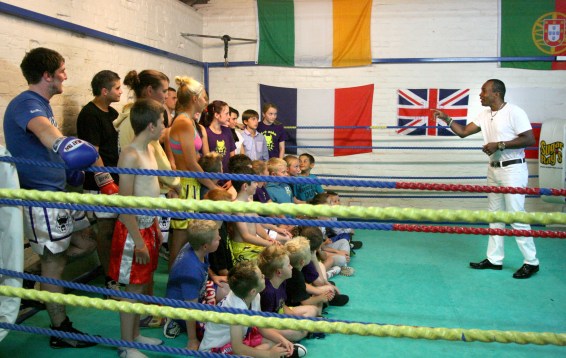 Motivational talk from the legend

Sugar Ray took the time to give 35 members of the Gym a motivational speech and a brief resume of his life and achievements, and the highs and lows of his life as a superstar Amateur and professional World Champion.

Sugar Ray took photos of the gym and the K.9's 'Wall of Fame' of champions from 1989-2012, and trophy and belt collection for his website, and said he loved visiting gyms and meeting up and coming fighters especially youngsters. 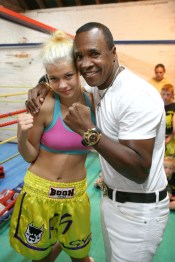 Even when his promoters were saying they were pushed for time to get to the Ocean Rooms Grand Dinner event, Sugar Ray took the time to have his photo taken with all the team, and then took time to have some photos done with A.B.A National Schoolgirl Boxing Champion, World Champion Kickboxer, Commonwealth Muay Thai Champion, and the only Female from Norfolk ever to win an A.B.A National Title, Jade Munro (15) he also signed a boxing glove with a good luck message on it for her.

Sugar Ray later tweeted Jade and said "you are great, it was lovely to meet you" and when Katie and Dave Munro tweeted him to thank him for finding time to come to the gym and talk to the kids, he tweeted back "It was my pleasure and I love meeting future champions!"

Club Coaches Dave Munro and John Hutchens would like to thank local businessman, promoter and K.9 Assistant Coach Leon Docwra for organising the gym visit (the only gym Sugar Ray Leonard has visited on his two week U.K Dinner tour).
Coach Munro said "Sugar Ray, thanks to Leon, made these kids so happy with this once in a lifetime opportunity to meet, talk to and be photographed with a true legend". 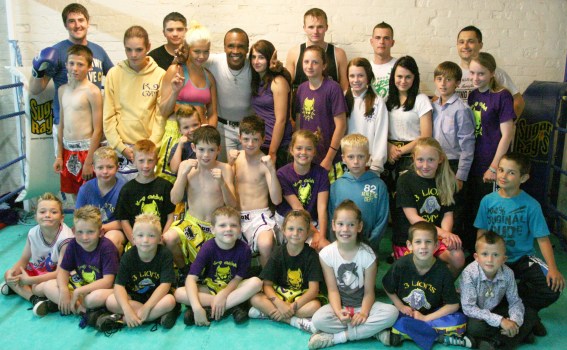 Training at the K.9 Fight Academy is every weekday evening and Saturday afternoons, at Legends Fitness Academy.