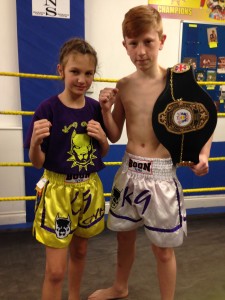 Sayer was in blistering form and won every round to become the new International Muay Thai Champion.

Younger sister Keira (9) was also in title action putting on a courageous display in her first Muay Thai bout where she took on the Spanish Champion ‘Paula’ for the title also over 5 rounds. Keira lost on points but will have learnt from the International experience.

K.9s Cam McGarrigle, Chaney Docwra and Connor McAleese will all be in action in Chelmsford in two weeks’ time in White Collar Boxing bouts.