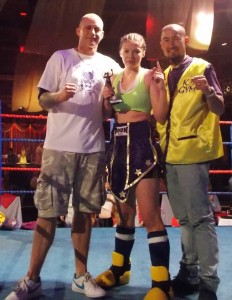 Two times World Champion Jade Munro (16) and Stylish Danny Mitchell (21) were two of the shining stars of the K.9 Fight Team which won all but one of its bouts at the ‘Battle by the Beach’ grand tournament last weekend. Jade (still only a junior) took on up and coming adult fighter Tasha Carway from former I.S.K.A World Heavyweight Champion Richard Vince’s B.B.A Gym in Norwich.

From the opening round the Norwich fighter came forward throwing classy kicks, Jade blocked and countered well, countering with fast high roundhouse kicks, in the second round after listening to the advice of coaches Dave Munro and Bin Tyler, Jade started slipping Carway’s kicks and countering with her sharp boxing skills and body kicks dictating the bout to the finish, after 3 great rounds of kickboxing the winner by unanimous decision was Jade Munro.

Jade and up and coming M.M.A fighter Jemma Thomas also did a charity boxing bout in aid of ‘Pattaya Orphanage’ in Thailand which Jade has visited on her many training trips to Thailand. The two girls between them raising just over £500, both girls showing great skill in a chess match of a contest, a great fight for a very worthy cause.

Danny Mitchell and opponent Alex Massey from Better Bodies Gym Lowestoft produced the fight of the night in their K.1 battle. Massey was the more powerful puncher of the two constantly coming forward throwing powerful right hands and some decent low-kicks however Mitchell was blocking moving and throwing classy combinations of his own, finishing with sharp low-kicks and using his good footwork to make it awkward for Massey, whenever they got in a clinch it was Mitchell who dictated the knee strikes, a very well rounded fighter, it was a great bout between two tough lads after 3 excellent rounds the winner by unanimous decision was Danny Mitchell, another great prospect for the K.9 team. The referee along with all 3 judges said they would like to see a re-match as it was such a great fight.

Schoolgirl champion Imogen Casey (14) was in great form beating Nottingham’s Lucy Callan in a close full contact battle for the English Schoolgirl -40 kilos title in a 5 round bout that first went Imogen’s way, then Lucy battled back to take rounds two and three, after a stern talking to from coach Dave Munro Imogen came out a different fighter and won rounds four and five to take a unanimous decision and the title.

Remy Sayer (12) was awarded junior fighter of the night for his excellent win over tough and game Lennox Coronet a great battle which Remy clinched with his better footwork and low-kicks.

Nicky McHugh (12) won the English -35 kilos Title, Mchugh’s boxing especially, is improving every fight, Nicky has now been training at and fighting for Dave Munro’s K.9 Team for seven years.

Chiara Spink (14) won a great little boxing battle with Spartan’s Beth Cates that really got the crowd going, both girls showing a lot of skill working behind their jabs, Chiara the more aggressive of the two edged it on work rate and punches landed, both girls should be proud of themselves.

Kerry Norfolk beat Emily Greiner in a close boxing bout which had the crowd going with its ferocity, A real battle.

Aaron Monson had an absolute war with Norwich’s Pat Gilding, after two close rounds Monson really took it to Gilding in the third clearly winning the round, landing some stiff jabs and right crosses, some felt Aaron was unlucky when the bout was awarded a draw, but still a great bout for the gyms hardest worker.

K.9’s only loss was by the tightest of margins, National Champion Tia Sayer took on the recently crowned WKU European Open Champion Josie Callan of Nottingham of 5 rounds for the W.K.A English Title, after 5 rounds where Tia was always the aggressor but didn’t always throw enough kicks, the judges gave it to Callan on a split decision, a great fight though between two tough girls.

Hadley Neller and Steve Witton both performed excellently in their boxing Skills bouts against lads from Heroes (Kings Lynn) and Spartans gyms.

A great night again for the K.9 Fight Team based at Legends Fitness Academy. Gym owner and record breaking school girl fighter Jade Munro would like to thank all the Sponsors and the 500 fight fans who turned up, for their support; especially Andrew Maveroudis and Ben Jay who have sponsored her fights since she was 11 years old, Jade is having a break from fighting for a couple of years due to a college scholarship but will still be supporting her K.9 team mates and students all the way.