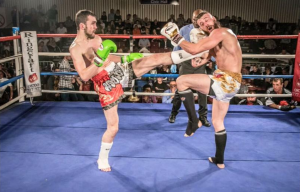 Mitchell, hurt in first round by a big right cross stormed back in the second and ground down Gould with his quick hands and hard lowkicks, It was a war for the 3rd and 4th rounds with Mitchell winning the rounds with his work rate and punishing lowkicks, putting the Essex man down with a lowkick at one point.

In the fifth round Gould was shattered , virtually at a standstill, but refused to go down or quit. Mitchell landed punches and kicks dominating the round, winning the ‘grudge’ bout on points, a great result against his toughest opponent to date away from home.The bout was awarded 'fight of the night' and was a war.

K9's Chaney Docwra (10) and Brodie Munro (8) were also on the massive Essex show which was broadcast live on the internet.

Chaney beat Lewis Newham from Basildon in a junior boxing contest with a unanimous decision Chaney's jab and straight shots controlling the bout from start to finish, a great performance from Chaney.

Brodie Munro was also in cracking form, winning his kickboxing bout against another Essex fighter. Brodie's jab and excellent footwork controlling the bout from the first bell, some great body and head kicks added up to a unanimous decision for Munro and a clean sweep for the Yarmouth team! All had tough hometown opposition so it was a great result for the k9 gym.

Dan Mitchell, Tia Sayer, Remy Sayer and Keira Sayer will all be in action at the World Amateur Kickboxing Championships in Benidorm Spain next week as members of the England National Team.