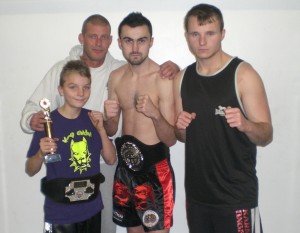 On a massive charity bill of Kickboxing, K.1 and White Collar Boxing at the Ocean Rooms Gorleston, Fighters from Yarmouth and Lowestoft battled it out with opponents from Nottingham, Newark, Norwich and Harleston, Diss, Cambridge and Felixstowe.

Top of the the bill was a K.1 clash between Yarmouth’s Danny Mitchell (K.9 Gym) and Lowestoft’s tough and explosive Alex Massey (Team Gladiator) for the South East Area Amateur Light Middleweight Title. After an explosive first round dominated by Massey’s boxing and Low-Kicks, Mitchell came storming back in the second landing superb Low-kicks and hard knees to Massey’s mid section, Mitchells knees were having an effect and the ref nearly stepped in as Mitchell had Massey on the ropes with a barrage of knees and punches when the bell went, Massey’s coach rightly withdrew him, an exciting battle with Mitchell becoming Area Champion by T.K.O.

Aaron Monson (K.9 Team) had his final boxing bout (due to needing a second round of hip surgery) taking on excellent Norwich Fighter Callum Meeks, it was a ferocious bout with neither fighter taking any notice of defence, Meeks coming forward aggressively and Monson countering, turning Meeks and countering again throughout the bout, the bout could of gone either way but the winner was Monson on a close points decision.

Imogen Casey (K.9 Team) was in super form beating Beth Cates (Spartans) on points in their boxing contest, Brave Beth was not 100% as she’d recently hurt her leg, but was determined not to pull out.

Kerry Norfolk (K.9 Team) beat Tania Ambrosia (Team Fuzeta) in an excellent close, boxing bout which swung first one way then the other all the way through a great battle between two tough ladies. K.9’s Connor McHugh, Ben Mitchell, Venu Lambo, Remy Sayer, Emily Greiner and Tia Sayer all took part in skills bouts and all looked sharp and impressive. As too did all the Spartans lads.

K.9’s Bin Tyler and Marty ‘Boy’ Duke did an exhibition bout to raise money for the ‘Ryan Harman Appeal’ and raised £843 for him. Spartans coach Tony Norman and Felixstowe’s Gary Garbutt also put on a charity bout and raised £650 for the charity ‘Scotty’s Little Soldiers’.

A great day day for all the Yarmouth and Lowestoft Fighters.