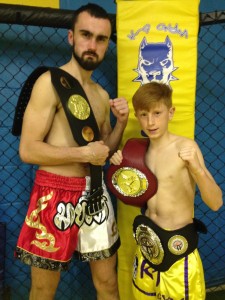 K.9 Gyms unbeaten Danny Mitchell turned on the class to clearly outbox Kings Lynn’s Oscar Lopez for the Area White Collar Boxing Title with a great display of infighting against his tough aggressive opponent winning every round, but Lopez pushed him all the way and was a tough lad who did his gym proud.

Dan fights next in Norwich on October 4th and will then take on tough K.1 fighter Dave Gould in Essex at the end of October before he travels to Spain with the England squad for the Amateur World Kickboxing Championships in Benidorm.

Venu Lambo (K.9) beat Norwich fighter Declan Forder in an excellent White Collar bout which swung one way then the other. Good points win for Venu.

Tia Sayer (15) beat Birmingham’s Amy Timlin in a female White Collar boxing bout on a majority decision that could have gone either way, Tia’s aggression edging it.

Reece Sanderson (8), the Area Light Contact Kickboxing Champion at -25k, beat Junior Taylor from Kings Lynn in a schoolboy White Collar Bout, both kids giving their all in a tough all action bout.
Connor McAleese (K.9 Lowestoft) beat Kings Lynn’s Nathan Mann in a close contest. Connor using his jab well especially in the third round.

Brodie Munro (7) looked a class act, edging every round in his Muay Thai skills bout with a tough heavier Patryk Shuchenko of Bury St Edmunds. This bout was sponsored by Claire at Marina Bay Café and was a great technical battle of Thai Boxing for such young kids; Brodie’s Kicks and sharp boxing skills really stood out.

Lewis Brown lost a close decision to Yarmouth’s Charlie Lawson but fought out of his skin and his coaches were very proud of him.

Hadley Neller (K.9 Lowestoft) had a bad ‘day at the office’ in his points defeat to Essex fighter Billy Shelton. Hadley not listening to his coaches decided to have a hooking war with Shelton which doesn’t suit his style.

All 3 clubs are based at Legends Fitness Academy Cobholm with classes everyday.