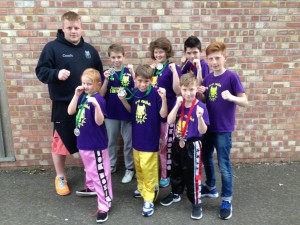 K.9 fighters who competed in Kent and Bury

K.9’s Kickboxers were in action in Kent & Suffolk over the last two weeks.

Tia Sayer (15) beat Jasmin also of the local PWKA Gym on points in her full Contact bout making use of her sharp jab and strong front kicks.

Keira Sayer (9) was also up against a home fighter when she beat Ellie Foot of home club PWKA Gym in her full contact bout, showing how tough she is against her taller heavier opponent.

Reece Sanderson (8) stopped his opponent to get a T.K.O victory great result for Reece winning two bouts in one week.

Connor McAleese (9) was unlucky not to get the decision in his bout which was awarded ‘Fight of the Day’.

As too was Lily Allard –Watkinson, who fought excellently. Both Connor and Lily were like little Pitbull’s tough and Aggressive.