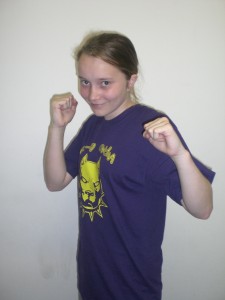 Overall fighter of the day was Spartans Mikey definitely a talent for the future!, K.9’s fighter of the day was Chiara Spink (14) who gave a magnificent display against an older heavier boy.
Most improved fighter award went to Ashton Neller (7). K.9 Fight Team entered 18 fighters all who performed exceptionally with a lot of talent shining through.

Spartans entered 14 who were all on great form, pick of the bunch were Mikey, Kai, Caleb and Jarrod, with little Roman (6) getting a trophy for an amazing four fights.

A lot of K.9 Fight Team and Spartans clubs best fighters will be in action at a massive Christmas show at the Ocean Rooms on December 8th