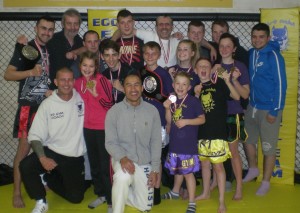 All Conquering K.9 Fight Team with their coaches

What a night of Boxing, Muay Thai and K.1 Kickboxing at the Ocean Rooms last Sunday. There were 20 bouts, and host gym, The K.9 Fight Team, won all ten of their competitive bouts.

A big crowd roared their approval as one exciting bout followed another. Former World Lightweight Kickboxing Champion Bin Tyler won his top of the bill White Collar Boxing bout with Norwich’s tough aggressive Adam Harvey. Tyler worked well behind his jab and showed great boxing skills circling Harvey for the first two rounds catching him with sharp counters. In the third round Tyler upped the pace and caught Harvey with some beautiful right hands that had Harvey back pedalling, but game Harvey always came straight back for more. Tyler taking a well-deserved points decision, to the roar of the crowd.

Tyler will be fighting K.1 rules on the next K.9 Gym event in August.

Chief support bout was K.9’s up and coming, undefeated Danny Mitchell defending his South East Area K.1 Title against Norwich’s former World Junior Kickboxing Champion Jack Wright over 5 rounds. Wright showed early on why he is considered such a heavy puncher, throwing bombs right from the bell, but Mitchells superior knees and low kicks started to come into effect at the end of the first round, the second round was more of the same, the Yarmouth man wearing down Wright with knees to his body. In the third round after two counts where Mitchells knees had put Wright on the canvas, the Norwich lad was saved by his corner. The crowd went mad when Mitchell’s arm was raised, successfully defending his title.

Contender for fight of the night was K.9’s Daryl Sharman’s K.O victory over brave game Alan Leggett representing Team Gladiator, an amazing White Collar battle where Leggett hit the canvas 3 times but kept bravely getting up till he was finally counted out in the third round. Sharman winning by K.O. but Leggett showing the heart of a Lion.

K.9’s Dan Bundy of Lowestoft also won by K.O in his K.1 battle with Ipswich‘s game Dan Mingy, putting him down with a body kick in round 1 and then stopping him with a knee to the body in the third round. K.9’s Carlos Carvalho beat Clacton’s Steve Clements in their excellent K.1 bout on points. K.9’s Liam Monson having his first White Collar bout beat Norwich’s Abdul Siktar on points in a great scrap. Nicky McHugh won the ‘Combat Challenge Belt’ in his bout with Barnsley’s Morgan Freeman, showing an amazing variety of punch combinations, a great win for McHugh who is just getting better and better.

A clean sweep of ten out of ten wins for the K.9 fight team. Mick Garlick had a charity bout for Cancer Research sponsored by J.C at The Grange and raised £285. Ashton Neller and Tia Sayer had skills bouts and showed great combinations and competitiveness.