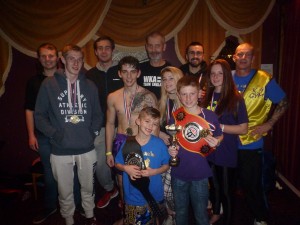 K.9 Fight Team’s Christmas Bash event was once again a huge success with a total of 14 bouts and the K.9 team winning 7 out of their 9 bouts.

Ashton Neller (K.9 Lowestoft) beat Rayan Ravjani (Rav Gym Luton) in a Kickboxing bout showing great strength and a superior jab in a close contest that Neller took a unanimous decision. K.9’s, second fighter up was undefeated junior Brodie Munro taking on also undefeated Joe Lewis (Basildon Freestyle Kickboxing) for the South East Area title -23 kilos. Both lads weighed in at 21 kilos and Munro quickly established his sharp jab that dictated the bout from start to finish, Lewis worked hard and had, success at close range but Munro won every round with his fast straight punches mixed with some excellent head kicks and fast footwork, Brodie Munro adding another title to the family’s collection.

K.9’s 2013 World Junior Champion Remy Sayer defended his English -35 kilo Kickboxing title against tough up and coming fighter Mikhail Ravjani from Luton in an excellent battle where Sayer’s boxing edged it for him but Ravjani more than held his own with his excellent front and side kicks especially in the third and closest round, unanimous points win for Remy Sayer.

Darryl Sharman (K.9) beat Spartan’s Cengis GilGil in a White Collar bout that had the crowd on their feet, both these lads are great crowd pleasers. Gilgil receiving the ‘Gamest Fighter of the Night’ award. In another local derby Carlos Carvalho (K.9) had a great battle with Spartan’s younger, Mikie Webber-Cane which had the noisy crowd roaring Carvallho winning on a split decision.

Top of the Bill Liam Plant, after a few years out, was back in action and was roared on to a second round retirement win, when his opponent Gary Brennan didn’t come out for the second round, Plant landing some good body punches at the end of the first. Leaving Brennan unable to continue

Dan Sinclair (K.9) lost his bout to Spartans Ricky Beresford on points in a close affair that swung Beresfords way with his better variety of shots and head movement. K.9’s Venu Lambo who only took the bout with 3 hours notice was out of sorts and lost on points to Taem Noguiera’s tough Modestas !

The W.K.K Officials awarded the senior ‘ Fighter Of the Night’ Award to K.9’s Danny Mitchell for his counter punching masterclass versus Tommy Constable and ‘Junior Fighter of the Night’ was once again awarded to Remy Sayer for his tough title defence victory over Mikhail Ravjani.

The K.9 Fight team would like to thank all their sponsors for their great support and their loyal fans for the noisy partisan support which helped them to their success. Tia Sayer and Imogen Casey looked classy in their demonstration bouts.