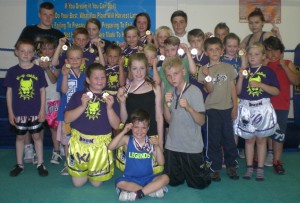 World Champion & Coach Jade Munro with some of the K.9 Fight Team that took part

In an event organised by the K.9 Fight Team over 70 Kickboxers and Boxers from Basildon, Great Yarmouth, Harleston, Diss, Dickleburgh and Lowestoft took part in 45 fights at Burgh Castle last Sunday.

35 members of the K.9 Fight team and ten members of the Spartans boxing club based at the Legends Fitness Academy all fought to a very high standard against some of the Eastern Counties best clubs.

Many were only having their first or second bouts and performed exceptionally.
K.9’s most most improved fighters of the day awards went to Brodie Munro (Male Boxing) and Imogen Casey (Female Boxing), Conner McHugh (Male Kickboxing) and Maisey Doole (Female Kickboxing), Spartans Fighter of the day was Craig Nagavetene (8).

The following local fighters all took part on this great entertaining day of Kickboxing and Boxing;